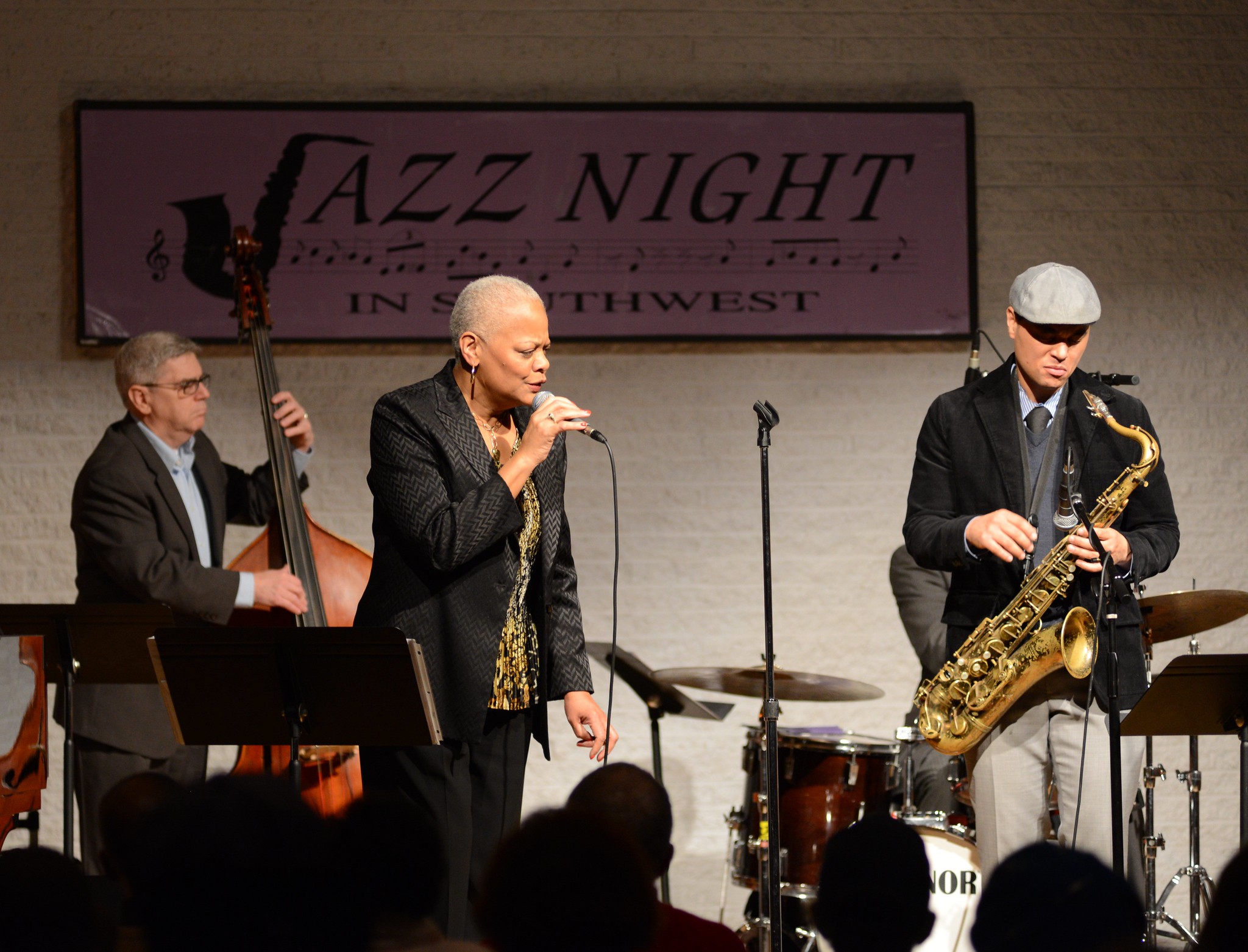 Westminster Presbyterian Church's renowned Jazz Night is set to return on Friday, after more than a year of hiatus due to the coronavirus pandemic. Shown here are bassist Tommy Cecil, vocalist Bonnie Harris and saxophonist Lyle Link, at a performance in 2013. Courtesy oscarpetefan/flickr
News

Dick Smith, an area vocalist and co-organizer of Jazz Night, announced the series’s return in a string of Facebook posts earlier this month. He wrote that the opening night band would feature an all-star lineup of D.C. jazz greats and longtime Westminster regulars: Christie Dashiell on vocals, Paul Carr on tenor saxophone, Marshall Keys on alto sax, Allyn Johnson on piano, Michael Bowie on bass and Quincy Phillips on drums.

Reverend Brian Hamilton, a co-pastor at Westminster and co-organizer of Jazz Night, said that the Southwest D.C. church has been following all federal and local guidance on COVID-19 safety protocols. With restrictions now lifted on in-person gatherings, Westminster will be open at full capacity (capable of hosting a maximum of 270 people) and the worker-owned Southwest Catering will be slinging fried fish and other soul food dishes in the basement, as it did every Friday before the pandemic.

Hamilton told CapitalBop that Westminster held off on reopening until now in part to make sure the entire “Jazz Night family” – musicians, church staff and volunteers, and Southwest Catering’s team – were comfortable returning to the space.

Hamilton said that they needed to operate at full capacity to make the series financially viable; admission will be $10, and as always, no alcohol will be served at these shows. He also said that Westminster will not be enforcing any kind of vaccination check, so anybody who is nervous about entering the space should stay home.

“One message I’ve been getting is: ‘How are you going to enforce vaccination?’“ Hamilton said. “We’re not going to enforce that. We can’t even if we wanted to. This is what the CDC is recommending and this is what we’re going with…. It’s an honor system here; do the right thing.” Mask-wearing will be recommended for those that are not fully vaccinated.

The church has taken steps to implement some COVID-mitigation efforts to the space. The workers of Southwest Catering requested plexiglass partitions for their food service stations; those are being supplied. Hamilton said his staff had added an ultraviolet air filtration device to its air-conditioning systems, to help filter out viral particles (from both COVID and other viruses).

Until March 2020, Westminster had hosted straight-ahead jazz performances every Friday night since 1999, at a price of just $5 for adults; admission was free for children 16 and under. Admission went up to $10 on rare occasions – like the show marking Jazz Night’s 20th anniversary – so regular attendees may not have thought anything of the $10 price tag on the fliers advertising the return show. However, Hamilton confirmed that the price of entry had been raised to $10 going forward for all regular shows.

“[I’ve] had people yelling at me for years about this,” he said, explaining that many friends of the church had urged him to raise the admission price. “We’re in an inflationary period across the board, and we have costs that are going up and we cannot ignore that anymore.”

“This whole thing has been so surreal,” Hamilton said of the pandemic. “We’ve lost some folk to the pandemic and other people have passed on as well. I’m just looking forward to the togetherness. It’s a powerful community, a wonderful gathering of people.”