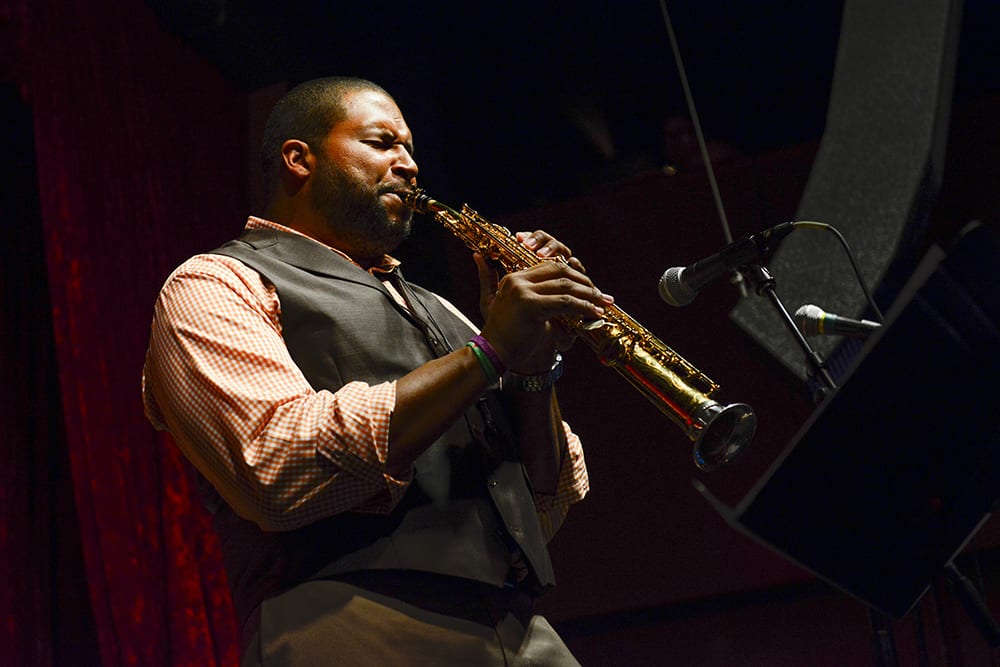 Jimmy Greene, pictured above, will make his Bohemian Caverns debut as a leader this weekend.

This weekend the rising saxophonist Jimmy Greene comes to Bohemian Caverns with his band of fiery improvisers—he’s an exploratory composer, and his bandmates are experts at turning his tunes inside out. After Greene’s late set on Friday night, Bohemian will stay open for several more hours to host its inaugural edition of the U Street Jazz Jam. Jeff Stacey has held the Friday-night jam at a handful of venues since last year, working to maintain a place where musicians can come out and jam with each other on a regular basis. Bohemian Caverns will be the jam’s home from now forward—and unlike Stacey’s previous venues, which have tended to be restaurants, it comes with a new advantage. “I’m looking forward each Friday to building on what the stellar [headline] performers do in their two sets, which already will be setting the bar high,” he told CapitalBop this week. “This is the major attractiveness to me of the new location of the jam.”

Also on U Street, you can see a local trailblazer in the experimental music scene at Twins Jazz: The cellist and composer Janel Leppin presents her Volcanic Ash ensemble on Friday and Saturday nights. The all-female cast of musicians will perform improvised music on instruments you would usually find in a chamber or symphonic ensemble. They mix their organic sound with a variety of analog synthesizers and audio effects.

Ron Kearns’ delicate alto saxophone sound can be heard at the Strathmore on Friday night, when he performs the opening concert in the Strathmore’s Jazz Samba Project festival, which runs through mid-June. He will be playing songs from his album Quiet Nights, which he recorded in tribute to the bossa nova tradition. The wondrous vocalist Lena Seikaly will be performing in a trio at the Loews Madison Hotel on Saturday night.

Anthony Pirog and Joel Harrison, two guitar talents hailing from Northern Virginia, will perform a tribute to the late guitarist Danny Gatton at Iota in Arlington. They both specialize in sending waves of sounds to audiences around the area using a variety of experimental techniques.