This month’s DC Jazz Loft features groups led by two of D.C.’s deepest drummers — Ian McColm and Trae Crudup. They’re different-sounding artists, no doubt, but they have one thing in common: they consistently break well out of expectations about the role of a drummer in an ensemble. Both Crudup and McColm show what it means to lead from the back of the bandstand. They know how to anchor a band deep in a groove, but they don’t hesitate to disrupt things with a dropped bomb on the kick drum or a cymbal flurry. That’s why each is often on the road with acclaimed, cutting-edge creative music ensembles.

Come to Rhizome DC this Sunday and hear both Crudup and McColm as they lead small ensembles at the DC Jazz Loft. And if that doesn’t convince you, how’s this: That afternoon, immediately before the loft, saxophone legend David Murray will give a special performance, in both solo and trio formats. The latter will feature CapitalBop’s director of presenting, Luke Stewart, on bass and Crudup on drums. (The Murray performance is technically a separate show, but if you come for that, we won’t shake you down for a second donation at the loft.) 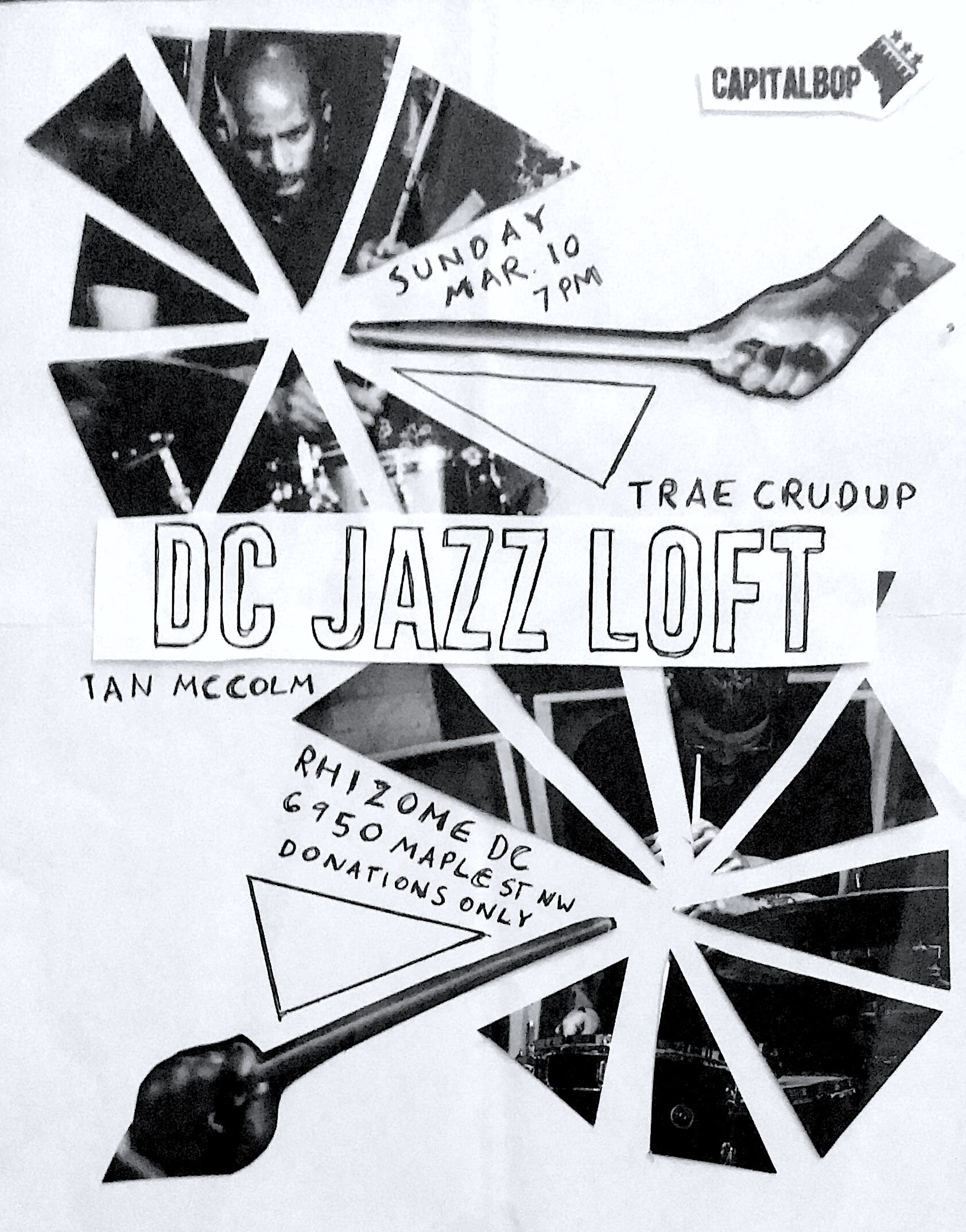 Ian McColm is a multi-instrumentalist, composer and visual artist whose body of work is a testament to artistic creation without boundaries: His solo projects feature textured, freely shifting electroacoustic soundscapes, while his work in live ensembles is deeply grounded and connective. McColm’s technical mastery allows him to shift swiftly from ballistic shows of force and restrained, punchy grooves. He’s played a significant part in creative music scenes in and outside of his home base of Alexandria, Va., touring with guitar duo Nagual and acclaimed free improv trio Heart of the Ghost. At the loft, he will perform with guitarist/multi-instrumentalist Mark Cisneros and saxophonist Jarrett Gilgore.

Warren G. “Trae” Crudup III is one part hometown hero, one part on-the-go touring sideman, and his stylistic palette is as broad and diverse as his gig schedule. A D.C. native, Crudup came up in the gospel tradition, and he has the powerful wrists and relentless intensity to show it — but years of gigs on D.C.’s jazz scene have given him the sensitivity to dial into whatever style he’s playing in. You might have heard him as the locomotion behind saxophonist James Brandon Lewis’s internationally acclaimed trio, or as the heartbeat of avant collective Heroes Are Gang Leaders, or as one-half of D.C.’s new progressive fusion duo Blacks’ Myths (whom you can find at the No. 2 spot on CapitalBop’s Best D.C. Jazz Albums of 2018 list). Crudup’s work as a leader is wholly distinct from those touring projects, though; his Unrehearsed band holds court every Thursday at Bin 1301 on U Street, fusing the rhythmic hip-hop sound of J. Dilla with popular R&B and jazz repertoire in what inevitably amounts to an absolute party of a jam session. (Their recent project, “Off the 6,” landed on our best albums list, too.) At the loft, he’ll play in a trio also featuring bassist Frank Javois, his right-hand man in the rhythm section of Unrehearsed, and keyboardist Noble Jolley.

Like always, the loft gets going at 7 p.m. and it’s at Rhizome DC, just steps from the Takoma Metro stop. There are no tickets, just donations collected at the door — 100 percent of which go to the performing artists. The event is all-ages. And any musicians who come out are encouraged to bring their instruments; the night will end in an open jam, and anything can happen at the loft.

In 2010, CapitalBop founders Giovanni Russonello and Luke Stewart put on the first DC Jazz Loft at Red Door, an artist-run studio space tucked in an alley just north of Chinatown. As more artists joined in and audiences grew, the loft became not just a jazz show, but a reliable facet of the D.C. arts scene at large. Red Door was eventually demolished to make way for new construction (oh, D.C.) and the loft bounced around to other venues before landing at Union Arts in 2013, where it stayed for three years before again meeting its end at the hands of developers.
Part of the problem was that the CapitalBop team wasn’t sure where to take the loft after that. We couldn’t find a place that would allow us to maintain the spirit of insurgency and liberated expression that was so important to these shows. But now, D.C. again has such a place: Rhizome DC is a collectively run space in Takoma that has become a haven for creative artists of all stripes. Thanks to Rhizome, the DC Jazz Loft has a home again, and it’s here to stay.