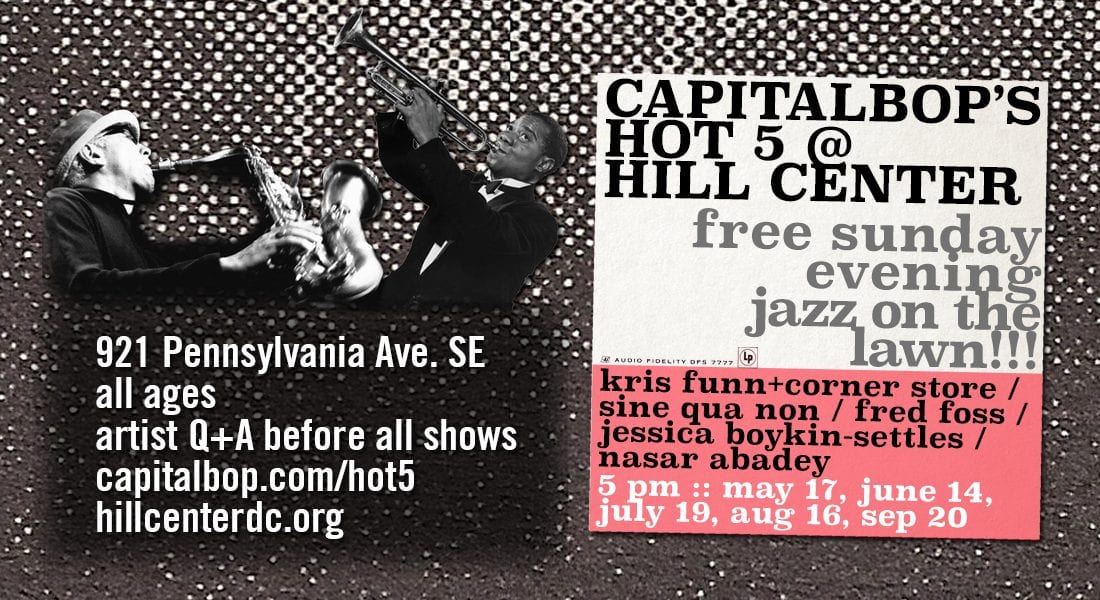 Now that summer has finally broken through the clouds, it’s time we announce our newest project. Hot 5 @ Hill Center is a monthly series of fun, free, all-ages shows that we’ll be presenting through September. These monthly, outdoor concerts are our first collaboration with Hill Center, a historical Eastern Market venue that was once a Civil War hospital. It all starts this Sunday with a performance from the action-packed Kris Funn & Corner Store!

Each show will start with an opening Q&A between the artist and CapitalBop’s editors (Luke Stewart and myself). That’ll be followed by two live sets on the lawn. All the artists highlighted here—some as young as their 20s, some in their 60s—are based in the area. And all have distinguished themselves as masters of the tradition with distinctive voices of their own. Scroll down for a full series schedule! 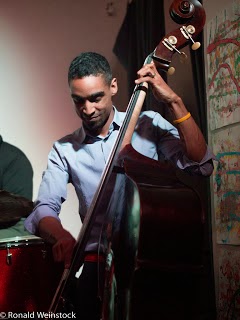 In Corner Store, bassist and composer Kris Funn mingles blues and jazz with hip-hop and gospel, which all gives way to a rollicking, funk-inflected sound. Funn grew up in Baltimore before attending Howard University and settling in the D.C. area. Since then he’s toured and recorded with jazz stars like Christian Scott aTunde Adjuah and Kenny Garrett. His bluesy, big-boned bass playing is Corner Store’s foundation, and its lighter fluid. From there, the quartet’s sound twists upward like smoke, kindled by crackling drums and snaky electric guitar.
CapitalBop calendar listing

Alto saxophonist Fred Foss is among the most important performers and educators on the D.C. jazz scene. He grew up in Corona, Queens, in the 1950s and ’60s, and remembers neighborhood encounters with jazz greats like Jackie McLean, Dizzy Gillespie and Jimmy Heath. Foss toured and performed with legends such as Lionel Hampton, Hugh Masekela, James Moody and Ray Charles, people who instilled in him an understanding of music’s importance—if you can truly reach an audience on a personal level, he knows, you have the opportunity to change their outlook and open their hearts. It’s an ethos that Foss has passed down to his generations of students: After moving to D.C. in 1980, he became one of the city’s most important jazz teachers, and nearly two dozen of his past students have gone on to become professional jazz artists, including the world-famous Marc Cary and Ben Williams. Though he’s happy to put the emphasis on his students, it’s always a special thrill to hear the guru lead a combo of his own.
CapitalBop calendar listing 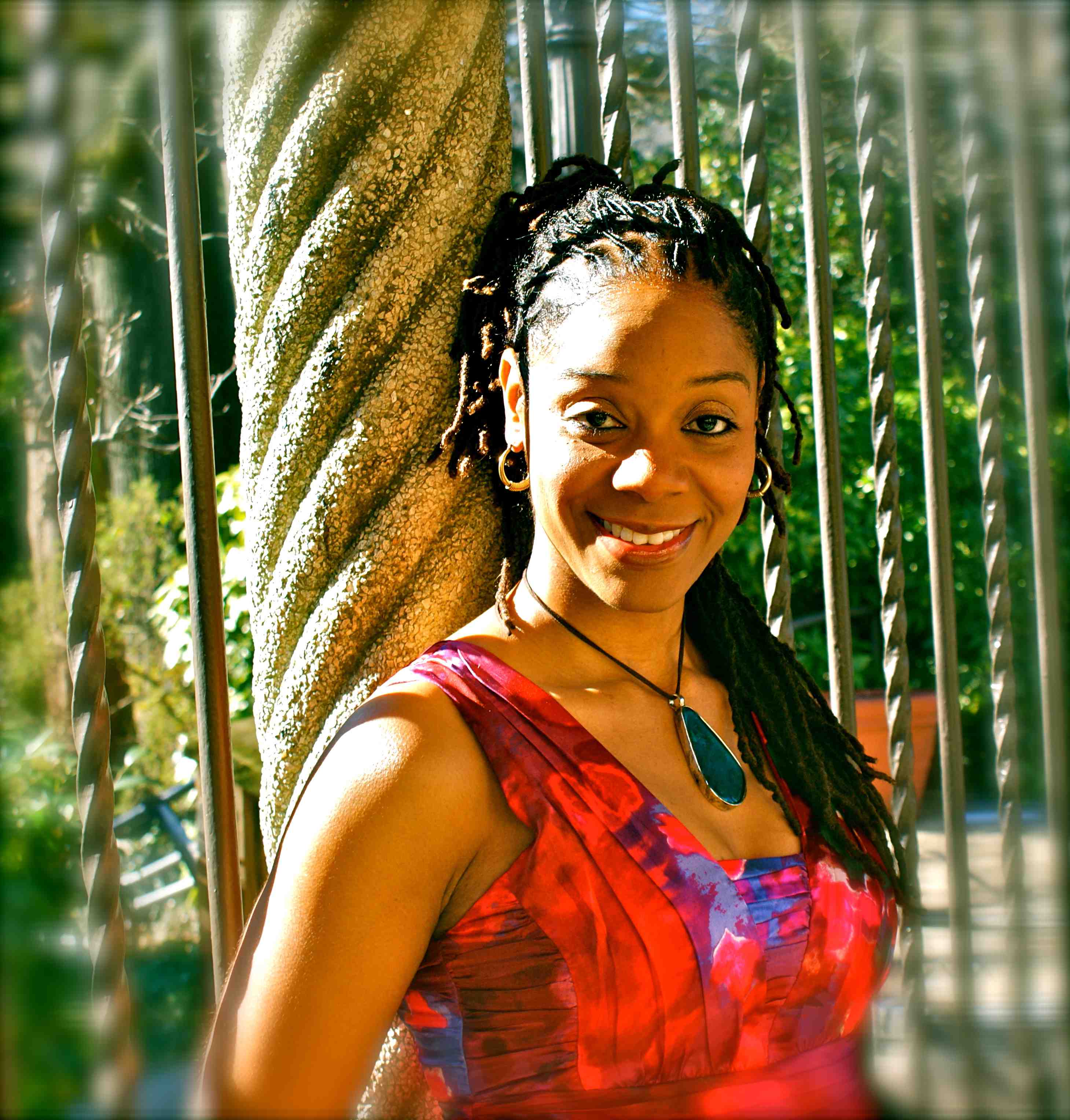 The enthralling area vocalist Jessica Boykin-Settles is best known for her skills as an educator—in addition to teaching at Howard University, she regularly offers lessons at museums and theaters, mixing jazz history with performances of tunes by classic jazz vocalists. But Boykin-Settles has a sound entirely of her own, smooth and authoritative and often rhapsodic; in her own original compositions and arrangements of modern jazz tunes, she pulls you into a place where experimentation is a kind of comfort food. (Things can get really interesting when she reworks Wayne Shorter’s tunes.) Boykin-Settles appears here with a small band.
CapitalBop calendar listing 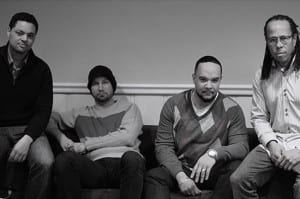 Bassist Michael Bowie has traveled the globe with jazz and R&B stars such as Betty Carter, Michel Camilo, Isaac Hayes and Angie Stone. But the D.C. native is just starting to exhibit his awesome skills as a composer and bandleader. Sine Qua Non is an unorthodox combo that he assembled in 2012; it works as a sandbox for Bowie’s wide-ranging creativity. In this group, ideas from Western classical run together with small-group jazz from the 1960s, ’80s pop, calypso and much more. Bowie is particularly enamored with Spanish classical guitar music, but there’s no guitarist in this band: To find the connection, you’ll have to listen for the minor-key tinge of Sine Qua Non’s music, or the group’s way of turning elegant filigree into substance. The quartet features Victor Provost on steel pan, Lyle Link on saxophones and flute, and Mark Prince on drums—an all-star lineup of D.C. musicians that gives Bowie’s kaleidoscope compositions an energetic lift.
CapitalBop calendar listing 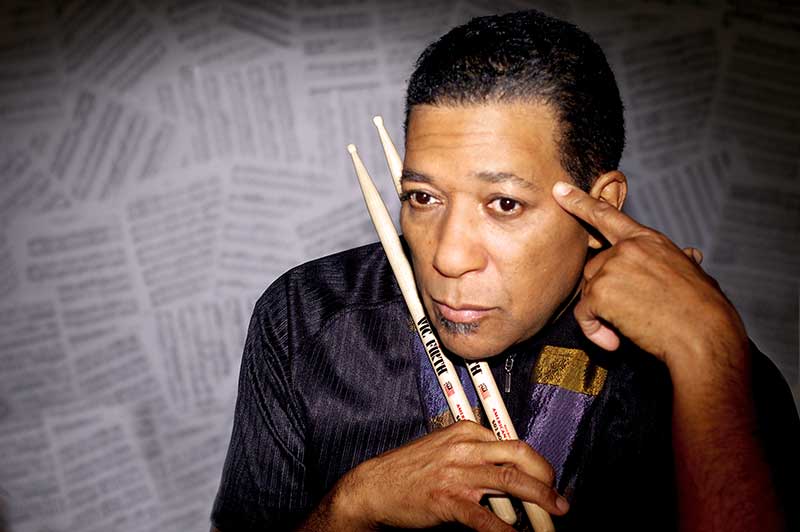 Longtime D.C. jazz luminary Nasar Abadey is a drummer, composer, bandleader, professor and mentor to many of the city’s rising stars. He writes powerful, razor-sharp originals that draw from straight-ahead jazz, Afro-Cuban and Afro-Brazilian music, modal harmonies and much more. His band, SUPERNOVA, is well known in D.C., and traveled to East Africa in 2011 as part of the U.S. State Department’s American Music Abroad Rhythm Road program. Abadey also composes for and directs large ensembles: Last year he led an 11-piece iteration of SUPERNOVA at the Kennedy Center’s Millennium Stage, and directed the 19-piece Washington Renaissance Orchestra in an acclaimed performance at the Lincoln Theatre. Abadey, who is a professor of jazz percussion at the Peabody Institute of the Johns Hopkins University, has performed with figures as diverse as Amiri Baraka, Dizzy Gillespie, Cyrus Chestut and Sun Ra. Abadey’s son Kush is an esteemed drummer based in New York, and performs regularly with Wallace Roney’s ensembles.
CapitalBop calendar listing