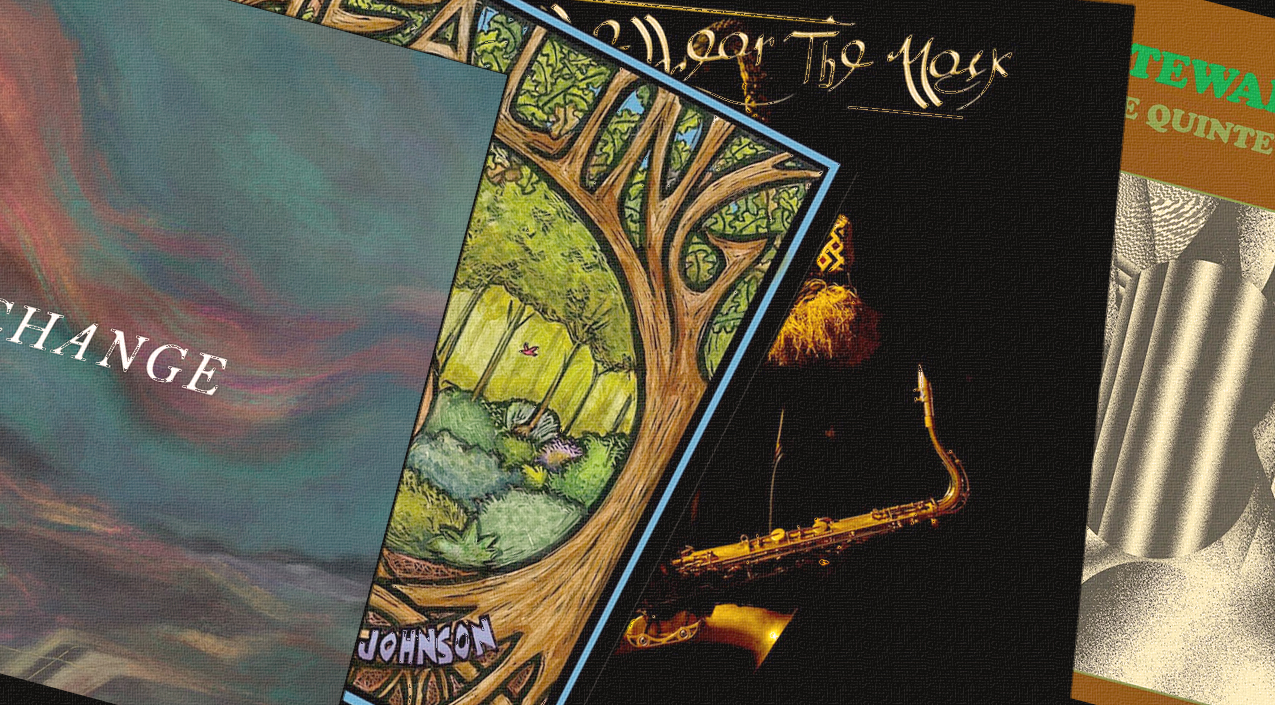 Fall 2020: We’re rounding the seventh month of a generation-defining pandemic; U.S. social and political tensions are coming to a head; and artists, like always, are seeking new ways to inspire, persevere, and resist. Sometimes, that’s through direct political action — catch D.C.’s artists on the streets calling on Mayor Bowser to save D.C. venues — and sometimes it’s through the act of taking a breath, putting your head down, and creating art with more focus than ever before.

The past seven days have seen no fewer than four major album-length releases from important figures in the D.C. jazz scene. I rallied some of my CB colleagues to help cover the releases.

And after you check out these albums, don’t forget: D.C. artists have been hustling on self-released singles since the pandemic began. I covered a handful back in June; recent favorites have included releases by Keith Butler, Brandon Woody and Amy K. Bormet. And pianist Oren Levine just dropped a new single, with heavyweight collaborators: R&B vocal star Carolyn Malachi, world-class bassist Kris Funn and Strathmore artist-in-residence violinist Nataly Merezhuk.

In a year as pivotal as this one, healing is precisely what is needed for a society that is sick mentally and physically. In September of 2020, Reginald Cyntje connected with longtime musical associate Allyn Johnson in his increasingly well-respected Divine Order Studio with a set of tunes exploring themes that address the healing process. Cyntje is known for his musical optimism, each of his releases a Celebration (one of his titles) of various aspects of humanity. The resulting album, though not overtly a “Covid record,” is clearly a product of its times.

The unusual instrumentation of trombone/piano duo might seem spare at first. But it allows the listener to relax and sink into the sound of two masters in communication. The compositions are impressively progressive; their tricky chord changes and substitutions alone are enough to keep the listener’s attention. Without a drummer, the piano fully assumes its role as percussion instrument, with Johnson keeping the groove throughout. Cyntje’s melodic playing raises the vibration, his clear and strong tone commanding the music and shaping it into completion. Though sparse in sound, Healing is an invitation for the audience to listen more deeply, and find the spirit in the music.

Streaming of Healing goes live on Sunday, November 1. (The album is already available for download from Cyntje’s website.) Luke Stewart and Jamie Sandel will sit down with Cyntje and Johnson at 2pm this Sunday to listen through the album and speak with them about their experience creating it. RSVP now, or tune in this weekend.

Bassist and composer Steve Arnold releases his debut album, Sea Change, today. The album features an array of eclectic instruments and thoughtful songs that cohere seamlessly into a beautiful whole.

Sea Change features a collection of tunes characterized by gentle, pensive melodies and steady pacing. The cryptic, contemplative titles of the tracks — “Red Turtle,” “Second Nature,” “Metamorphosis” — allow their meanings to be left up to the listener. Arnold and his collective set a wistful-yet-hopeful tone on Sea Change, one sure to bring a little light to a decisively grey moment in our country’s history.

It’s exciting to see the evolution of an artist’s compositions, and that’s very much the case with “Greenfield,” a piece that our presenting team featured in a CB Sessions video from last year. “Greenfield” is a guitar and bass-driven tune with a lilting, almost melancholy melody, with keys and a sax to match — each instrument taking its time to inhale the gentle air of the song. A touch of accordion eases in just before the songs’ crescendo, lifting the tune to a serene, almost ethereal place. Much of the album echoes that same ambiguous yet calming aura, leaving the listener to conjure a meaning to each tune specific to themselves. In times as tumultuous as these, Sea Change offers a much needed deep breath.

BJ Simmons, ‘We Wear The Mask‘

Saxophonist BJ Simmons, a fourth generation Washingtonian, puts his ability as a musical polyglot at the forefront of his new album We Wear The Mask, released last Friday. The 10-track record allows Simmons to flex his chops in a variety of styles, and that range is evident right off the bat: Following the invocational “Asé,” Simmons’ Quintet channels the unbridled, galloping energy of mid-60s Miles Davis into Joe Henderson’s “Inner Urge“ before settling into a steady groove on the Afrobeat strut of “S.O.S” (a Simmons’ original).

“S.O.S” is driven by Herman Burney’s agile, percussive bass line, weaving through percussionist Jabari Exum’s hypnotic patterns. Both musicians, along with drummer Howard “Kingfish” Franklin Jr., are veterans of the DMV music community; rising-star Baltimore trumpeter Brandon Woody rounds out the group. Burney seems to serve as an unofficial first mate in the crew, playing with the string quartet on an excerpt of Samuel Barber’s “Adagio for Strings”; executing an enchanting introduction to “In A Sentimental Mood”; and delivering a furious invocation on bowed bass to open the title track.

That number, an arrangement of the poem of the same name by the great African-American poet Paul Laurence Dunbar, is Simmons’ strongest moment on the record. Simmons, with Woody and guest hornist Abe Mamet, sets a rolling, chiming riff that augments the quiet testimonial of Dev Duff’s vocals. It’s a powerful statement of artistic direction and philosophy.

Note: Anyone who is remotely familiar with CapitalBop knows that we can’t review a Luke Stewart release without some conflict of interest: Stewart is a CapitalBop co-founder, and my friend and colleague. But Stewart is inarguably a standout musician from D.C.’s jazz and creative music scenes, having garnered glowing praise from Downbeat, the Washington Post, and Pitchfork, among many others — and this album is a watershed moment in his career as a leader. We’ve struggled with this journo-ethics question before, and as we did then, we offer this piece as an editorial homage, rather than an “objective” review. (It also bears noting that Stewart plays no editorial role at CapitalBop these days, beyond the occasional written piece — like his review in this collection, and a beautiful feature from earlier this week.)

The past few years have been particularly ascendant for Northeast-based bassist and organizer Luke Stewart, marked by critical acclaim and countless European tours. Exposure Quintet, released last Friday, is a milestone project in that ascendancy. The album brings Stewart’s steadily developing creative voice in concert with a new set of collaborators: a supergroup of Chicago musicians, assembled for the project by Dave Rempis for his Exposure Series at Elastic Arts. Like Rempis himself, every artist on the project — Edward Wilkerson, Jr. and Ken Vandermark on reeds, Jim Baker on piano, and Avreeayl Ra on drums — is a standout member of Chicago’s widely regarded creative improvised music community.

Every note from Exposure Quintet seems to stem from a single, vast spiritual wellspring. But sonically, the five-track, 80-minute LP contains a lot of contrasts. Wide-open passages with no clear rhythmic pulse will give way to driving grooves, and firmly blues-grounded melodies will expand and diffuse into a broad spectrum of tones and textures, sometimes all within the course of a single track.

Throughout the record, Stewart’s bass sits just slightly back in the mix. Even during his solo passages, he’s in no hurry to come to you; instead, you’ll catch yourself leaning forward in your seat, so as not to miss a single murmured phrase. But you can feel Stewart’s presence every second of every track, maybe most of all when he’s anchoring one of the album’s segments of cyclical, serpentine, undulating groove. (That’s a musical signature of Stewart’s, recognizable in other projects like Heart of the Ghost, Blacks’ Myths and Irreversible Entanglements).

Stewart can guide and cohere a band without the slightest hint of hierarchy or control — and that singular ability allows each of Exposure Quintet’s five tracks to contain multitudes. His music is a strange sort of quantum art: He channels collective improvisation to create invocations of the past, connection to the present, and visions of the future, all at once.