Editor’s note: This is the third of four album reviews being published over the course of two weeks, spotlighting new releases from some of our favorite D.C. jazz musicians.

Herman Burney’s new release is true to its namesake. Offering, the D.C. bassist’s first album as a bandleader, finds him putting forth a generous musical statement consisting almost entirely of original songs. Many of these tunes are dedicated to some of the most influential bass players in jazz’s history, from Keter Betts to Percy Heath. Almost every minute is steeped in a sense of homage, not just to great musicians who have inspired Burney but to the experience of the Black Southerner and the music that grew from it.

In songs such as “Papa’s Folk Song,” “Sautéin’,” “Low Country Sunset” and the gospel standard “Precious Lord, Take My Hand,” Burney references the Southern landscape of his upbringing, where jazz first took root. His bass playing is a veritable tour de force, going from intricate pizzacatto solos to steady grooves. Burney, who performs at CapitalBop’s D.C. Jazz Loft this Sunday, demonstrates a veritable dynamism on the instrument. And considering the area heavyweights featured on the album – pianist Allyn Johnson, trombonist Reginald Cyntje and steel pan player Victor Provost, to name only a few – Offering is a platform not just for Burney but for a showcasing of the D.C. region’s multifarious talent.

At 20 tracks and more than 70 minutes, the album certainly wastes no CD space. It is a mix of sparse grooves and heavily swung hard bop. Perhaps the most compelling tracks are those on which Burney demonstrates the beauty of the acoustic bass as a solo instrument. Unlike the bombastic freneticisms of other modern solo bass performers, Burney takes the art form back to the days of Oscar Pettiford, playing simple yet heartfelt phrases, making for a singular emotional statement.

It is clear that Burney is a champion of traditional bass playing. In some of his compositions, he sticks to the tried-and-true aesthetic of driving, medium-tempo swing over two-five chord progressions (the harmonic foundation of traditional jazz). The use of Provost on steel drums throws us for an interesting loop as a substitute for jazz’s classic vibraphone sound, but vibes star Warren Wolf is also featured to triumphant effect on eight of the tracks.

—
Herman Burney plays at the D.C. Jazz Loft this Sunday, leading a duo with Reginald Cyntje. A donation of $10 is suggested, and the show is BYOB. More information is available here. 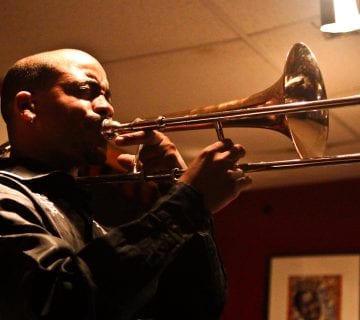 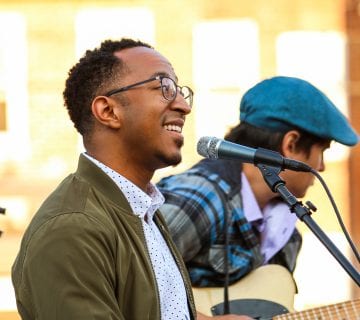