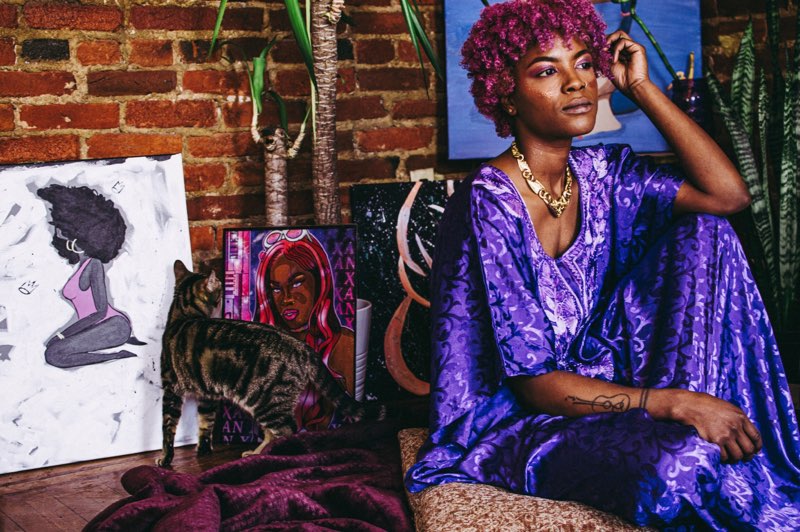 On a chilly, clear-skied February morning in Baltimore City, the young composer, multi-instrumentalist and vocalist Rachel Winder was holed up in the Moose House Recording Studio, delegating out musical tasks as she glided from the vocal booth to the engineering room. Standing over her recording engineer’s shoulder, she offered thoughts and suggestions for slight enhancements to her new single, “Freedom,” out Friday. Sharp and attentive, Winder listened closely while he filled out the low end to the track and added atmospheric elements to the vocals, like a billowing reverb and sensuously haunting echoes of delay.

Each room in the studio was inhabited by a handful of young Black musicians, all there to play on Winder’s new album. During breaks, she chatted with her social media manager, while awaiting the arrival of a videographer who would be gathering preliminary shots for the song’s music video. Her team was calm and in good spirits, and the energy in the studio felt communal and productive.

Known as Ray to friends and collaborators, Winder has a kind and patient bearing, yet she was clearly in command of the several cogs revolving around her, stewarding the process of musical manifestation with quiet confidence and decisiveness. “We make sounds out of what we are,” she said as she prepared to go into the booth to lay down vocal ornamentations.

Behind the mic, her clear voice softly projected an Aphrodite-like sweetness, but it was cut with the earthy wisdom of an old sage. The Baltimore-based rapper and singer I.R.A. (a.k.a. Irapalot) was there to contribute vocals complementing Winder’s supple voice, and the lightly jazzy neo-soul track called back to a long tradition of male/female duets — from Marvin Gaye and Tammi Terrell to D’Angelo and Lauryn Hill.

Winder warmly took direction from her engineer, Matthew “Mateyo” Lampart, while in the vocal booth, trusting his ear as he made suggestions on how to execute new vocal touches. They got what they needed in three tries and emerged from the booth encouraged. “I have a new level of comfort today. I’m feeling this,” Winder said.

It hasn’t always been so easy for Rachel Winder to find her voice in jazz. After studying saxophone throughout grade school and high school, she applied and auditioned for the Peabody Conservatory jazz program and received an acceptance letter. In the lead-up to the school year, she said, “everything seemed fine. I spent the summer at Boston University Tanglewood Institute, and I was preparing for the school year. I moved into the dorms and I was excited, everything felt perfect.” Thinking that this would be a beautiful start to a viable future in jazz, she was disappointed to learn that the school had rescinded her acceptance to the program, she said. “When I got my class schedule, there were no jazz classes on it,” she said. “It was a surprise to me, and I feel like it could have been avoided with an email saying, ‘Hey, want to audition and try again next year?’ But no one said anything. It was pretty devastating and confusing.”

None of her professors or deans were able to give her a straight answer as to why the acceptance was rescinded, she said. “I was 17 when I started,” she said. “I had no one. My parents didn’t come with me on the day I moved to the dorms. I was by myself and I feel like they knew that. They just said, ‘Oh, you’re not in this department. Go see the department dean.’ And that dean sent me to someone else, and after a while, I thought, ‘OK, I won’t be taking these classes.’ I felt defeated for a while but then decided to keep moving forward. I just kept it pushing.”

Winder stopped looking for answers and engineered her own educational experience by entering the institution as a classical saxophone major but building her class schedule to include as many jazz electives as she could. She secured a spot in the school’s big band and other small jazz ensembles throughout her time at Peabody.

She was determined to immerse herself in the music and learn through sight, sound and visceral experience about what true improvisation was. Outside of school, she stealthily attended jazz clubs and jam sessions, despite being underage. “Club 347 used to have these improvisation nights, and I would go to places in D.C.,” she said. 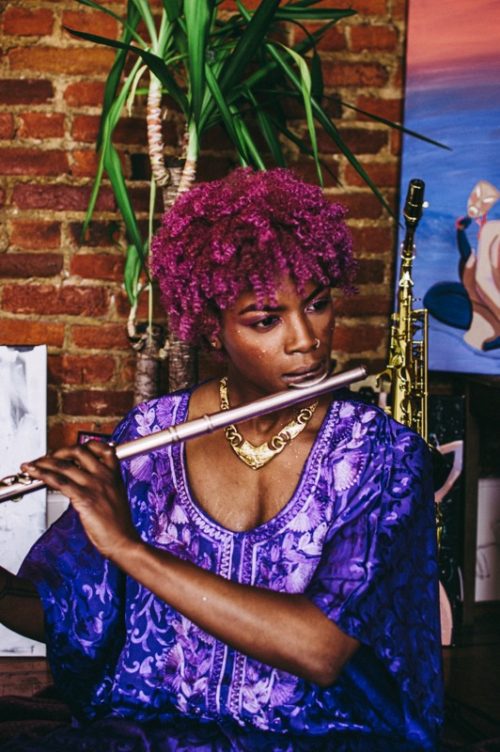 “I would get pulled to the side. A lot of the [musicians] there would tell me, ‘You need to listen to this, and learn this,’ and that was my training,” she added. “I would call people for lessons, and listen to my peers and study what they studied.” Winder placed second at the Washington Women in Jazz Festival competition for young artists, which she took as important validation that her focus was paying off.

With the combination of compositional study at Peabody and witnessing jazz improvisation in person, Winder made her way through the ranks of the Baltimore jazz scene, impressing other musicians with her emotive and skillful performances. But in some ways, she still never felt fully at ease wading through the male-dominated jazz scene.

“It’s hard to feel comfortable and like your work is respected, whether you’re a composer or a player,” she said. “There’s not a lot of [women] around, so you really don’t know how to be, and it’s tough. I had to find my own lane to play the repertoire that I wanted to play, and people frowned upon me a lot, [saying] I wasn’t playing the standards [correctly] or playing changes in the way male jazz musicians would play them. But I’m not them, and I feel like a man would be more celebrated if they brought their own style to the music. It’s hard to feel validated, and  you constantly have to muster up self-confidence and motivation to keep going.”

As uncomfortable as the experiences of women jazz musicians can be, Winder had a natural gift onstage. And during the Covid-19 pandemic, she was able to expand on that by transcribing several recordings of her live works, as she found time to focus on manifesting her first studio album. The past year has given her the time to channel all that she had learned about grief and overcoming challenges into an artistic offering. Along the way, she worked toward a visual approach to composition; she is working to define a style of her own that she calls “cinematic soul-jazz.”

“Freedom” is the first single from Winder’s forthcoming debut album, Vignettes, which she plans to release later this year, and which will highlight Winder’s compositional and arranging skills. She wrote all the instrumental parts for the album, which includes horns, violin, harp, bass, and flute. The album will also surprise even those who already know her music by revealing her to be a skilled singer as well: It’s a talent she has rarely publicly explored.

At Peabody, Winder sometimes struggled to keep up academically and to find a social community in an institution with only a handful of Black woman students. She was often made to feel out of place and constantly questioned by school security as to whether she was a student. Then, in junior year, she had to endure a personal tragedy that few of her fellow students could relate to, but that would shape the sound and depth of her music going forward. “I went through a traumatic moment where my partner had passed away in my arms and there were a lot of people passing away around me,” she said. “I couldn’t pick up my saxophone for a year. But I always had my guitar near me, and I just started writing songs. That’s when I started singing.”

This helped to prepare Winder in some way for the losses that lay ahead amid the pandemic and to become a beacon of strength for those around her. “I’m trying to keep my mind healthy and be completely here because I feel like I’ve got to be strong for a lot of people,” she said.

While being present for others, Winder keeps a safe space within herself where she can offer a message through her unique experiences. Of the song “Freedom,” she said: “I want people to feel empowered. I want people to hear the opening lyrics and understand that freedom is freedom from yourself and the negative ego side of you. I want people to walk away knowing the freedom was inside of them the whole time.”

Rachel Winder has had to create her own goals and reality from scratch — through instinct, determination, and a hunger to learn. She embodies a gentle and magnetic aura that draws people in and, as her young career is already showing, encourages productive collaborations. Along the way, she’s shown herself to be an emblem of survival and reinvention, as have so many jazz musicians who have come before her.