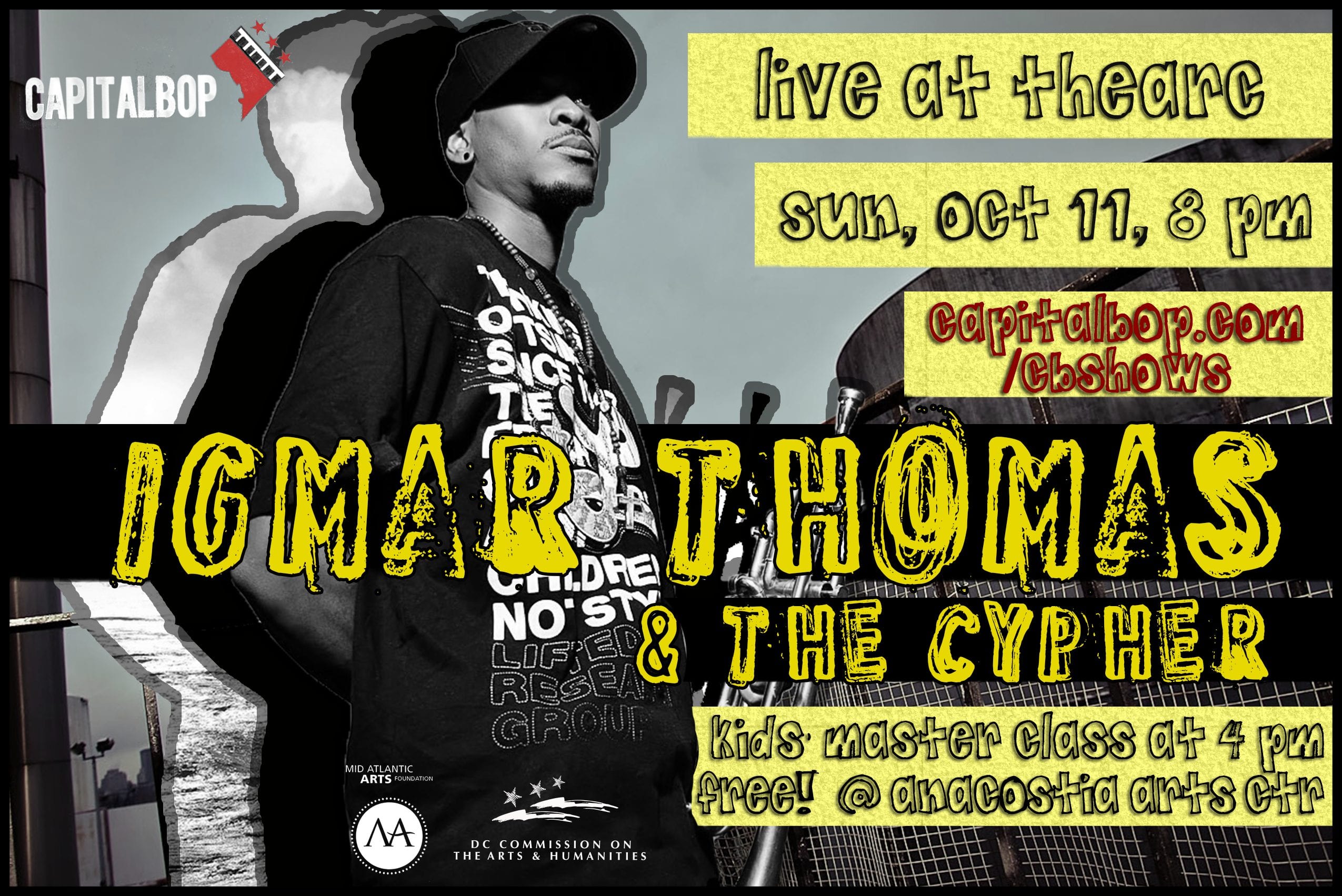 Summer has ended, but we’re keeping the heat set on high. On October 11th, CapitalBop presents Igmar Thomas & the Cypher, featuring DJ Raydar Ellis and vocalist Chris Turner. Led a young New York-based trumpet titan, the Cypher is one of the most exiting bands around today, with a masterful blend of hip-hop and jazz that is all its own.

With this show we’re proud to bring our Traveling Loft series to Anacostia for the first time. It’ll all happen in an intimate gallery space at THEARC, Ward 8’s premier music venue, located just steps from the Green Line. And opening for the Cypher will be Donvonte McCoy, an Anacostia native who’s known for his own mashup of jazz, funk, go-go and hip-hop.

Igmar Thomas has played with some of the biggest names in jazz and hip-hop, and he’s currently overseas on a tour with Ms. Lauryn Hill. He’ll get back to the States just in time to bring his stew of big band jazz and hip-hop aesthetics to D.C. Fans of acts like The Roots might just lose it upon exposure to the intense power of the Cypher, a seven-piece group that carefully gels Golden Era hip-hop and contemporary jazz into a neo-jazz sound that’s entirely of the present moment.

THERE’S A FREE HIP-HOP & JAZZ MASTER CLASS HAPPENING BEFORE THIS SHOW! SCROLL DOWN, OR CLICK FOR MORE INFO

A Berklee College alum, Thomas has collaborated and arranged for artists such as Bilal, Esperanza Spalding, Robert Glasper, Marc Cary, Kamasi Washington Mos Def and others, and made an appearance on The Tonight Show with Jay Leno. For years he’s led the fabulous Revive Big Band, which makes large-scale arrangements of jazz standards as well as hip-hop tunes, and he was recently featured on Revive Music’s buzzed-about compilation Supreme Sonacy Vol. 1 (Blue Note). And the rest of the talent in the Cypher is just as remarkable. Check out the special guests: Chris Turner will sit in on vocals; he’s one of the most in-demand male voices in the game these days, having worked with Erimaj, Spalding and many others. And DJ Raydar Ellis is a hip-hop historian, MC and turntablist who teaches at Berklee and is known as one of the very finest around.

To get to THEARC, just take the Green Line to Southern Ave., and walk the one block to the theater. The concert will take place in the intimate recital hall–which Raydar is going to help turn into a low-lit, groove-heavy club. At 8 p.m., the live music begins with Donvonte McCoy & 3rd Floor. Arguably the baddest trumpeter in D.C., McCoy has been making audiences move for over 10 years at Eighteenth Street Lounge, where he plays on the top floor every Friday and Saturday night (3rd floor–get it? ahhh). The Cypher then takes the stage at 9:15; they’ll be playing till 10:30, and Raydar will close out the night with a short DJ set.

And make sure to spread the word to friends and family that Igmar Thomas, DJ Raydar Ellis and others will be giving a jazz-meets-hip-hop master class at the Anacostia Arts Center at 4 p.m. on the day of the show. There will be a limited amount of space, but you can find out more and register for the free master class right here.

This engagement of Igmar Thomas & the Cypher is made possible through the DC Special Presenters Initiative program of Mid Atlantic Arts Foundation with support from the National Endowment for the Arts and the DC Commission on the Arts and Humanities.